Skip to main content
Posted by Claire Morduch on

Starting next fall, the administration of Mayor Bill de Blasio will create college savings accounts for thousands of New York City kindergartners, in a three-year pilot program intended to increase the number of low-income children who go on to attend college. 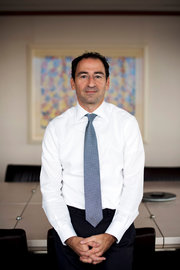 Jon Gray, who with his wife, Mindy, gave $10 million to help finance a college savings account program under the de Blasio administration.

Each year, the families of about 3,500 children will receive an initial $100, to be deposited into a 529 college savings account, and will be eligible to receive another $200 over four years if the family meets certain benchmarks, such as saving small amounts of their own money. The program is being financed by a $10 million donation from Jon Gray, the global head of real estate at the investment firm Blackstone Group, and Mr. Gray’s wife, Mindy.

Several other cities and some states have started similar programs in recent years, with the dual goals of getting low-income students to aspire to college and encouraging their families to save for it. Since 2012, San Francisco has created a savings account for every kindergartner in the city’s public schools. Every baby born in Maine automatically receives a $500 college scholarship, thanks to the Alfond Scholarship Foundation. Similar programs exist in Indiana, Nevada, Oklahoma and the cities of Boston and Oakland, Calif.

The program will begin in New York next fall in one of the city’s 32 community school districts. Julie Menin, the commissioner of the Mayor’s Office of Media and Entertainment, who conceived of the program in her previous job as the commissioner of consumer affairs, said the district chosen would be announced in December.

Children enrolled in traditional public and charter school will receive accounts. The program will be overseen by a newly created nonprofit, NYC Kids Rise, whose board is to include Ms. Menin, Schools Chancellor Carmen Fariña and Mr. de Blasio’s deputy mayor for strategic policy initiatives, Richard Buery.

Ms. Menin said that soon after taking office in 2014, she met with the treasurer of San Francisco, José Cisneros, who told her about that city’s program.

“I became more and more excited about the possibility that we could do this here in New York City,” she said, “and I felt that it fit in perfectly with the mission of the de Blasio administration in terms of increasing access and inclusion for low-income New Yorkers.”

One of the goals of the program is to introduce low-income families to 529 accounts, which allow families to deposit money that can grow tax-free as long as it is ultimately used to pay for higher education. In general, wealthier families are more likely to have 529 accounts, and they derive greater tax benefits from them.

The initial $100 contributions will be deposited into an omnibus 529 account, so that undocumented immigrants, who do not have the Social Security or individual taxpayer identification numbers needed to set up individual accounts, can participate. At the same time, families will also be encouraged to start their own individual 529 accounts for saving.

Actual college savings, if families do not add money to the funds, will be slight: With only the $100 initial contribution and $200 in matching funds, assuming a 4.5 percent annual return, the child’s account would be worth about $475 after 12 years.

Champions of child savings accounts, however, argue that they have an impact beyond a simple financial one, by encouraging parents to believe that their children can go to college.

Since most child savings account programs are relatively new, research on their effects is just beginning. A randomized controlled trial of mothers and infants in Oklahoma, in which some infants were selected to receive $1,000 in a 529 account, along with incentives for the mother to save additional money, found that those disadvantaged children scored better at age 4 on a measure of socioemotional development than similar children who did not receive the money. Three years after the study began, mothers of infants who received the money also showed fewer symptoms of depression.

William Elliott, an associate professor and director of the Center on Assets, Education and Inclusion at the University of Kansas, said child savings accounts had many potential financial benefits.

The Office of Financial Empowerment at the Department of Consumer Affairs runs centers across the city that offer free financial counseling. The department plans to use the centers in the chosen school district to educate families about 529 accounts, as well as help them set up their own.

More than 800,000 New Yorkers do not even have bank accounts, Ms. Menin said. She said she hoped that the program would have a ripple effect in connecting families with financial institutions.

Mr. Gray said he and his wife were attracted to the idea of increasing financial literacy among low-income families and encouraging saving.

“I love the idea of democratizing the benefits of long-term investing,” he said.

Ms. Menin said she hoped eventually to expand the program to the rest of the city, which she estimated would cost $15 million annually.

Mr. Gray said he was open to making additional donations but would first see how many families opened up their own 529 accounts and saved enough to get the $200 in matching funds.

“If we get a lot of takeup,” he said, “and we have a lot of families saving money, investing, opening up these 529 accounts, that to me and to us would be a sign of real success.”